Posted by Administrator in Estate Planning 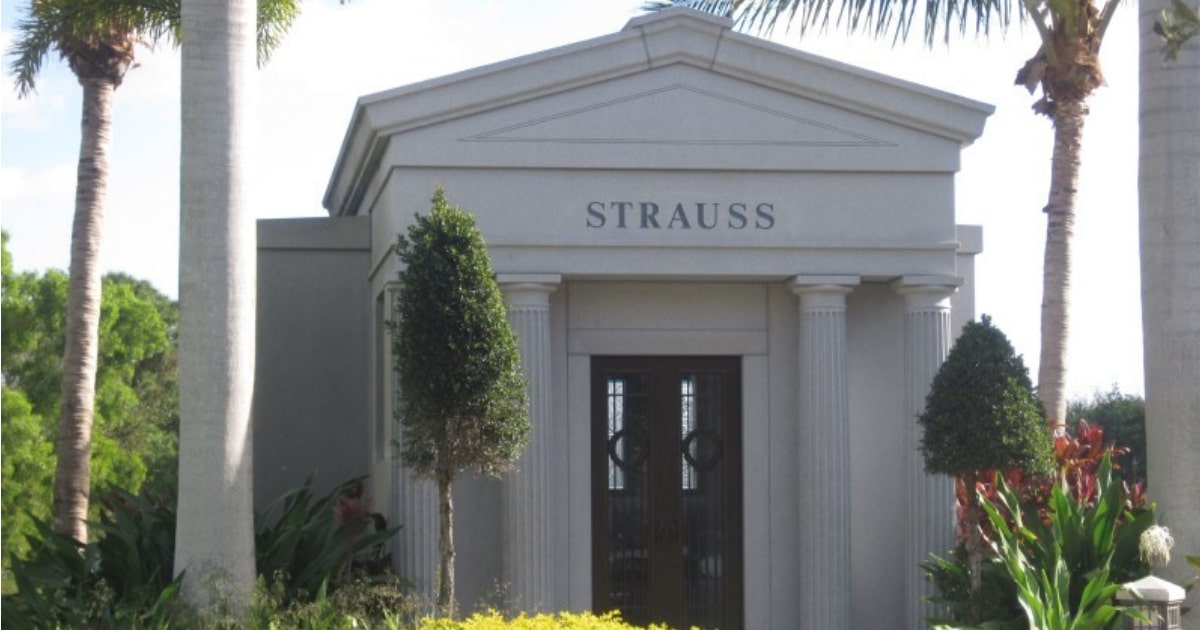 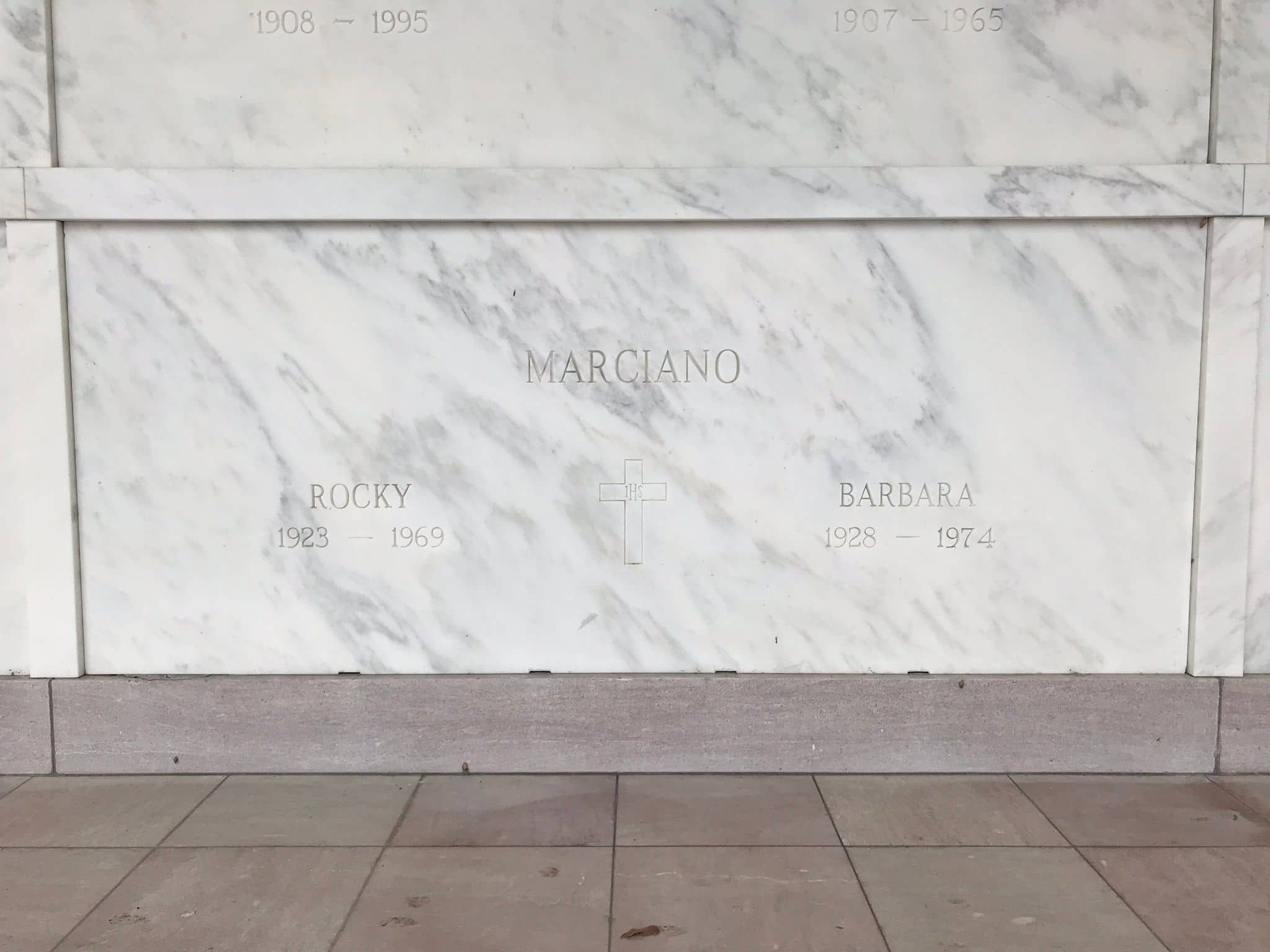 One of history’s greatest boxers, Rocky Marciano held the title of Heavyweight Champion of the World for four consecutive years. He remains the only Heavyweight Champion to retire undefeated. After 21 years he was finally inducted into the International Boxing Hall of Fame, and we can all remember his life through the now classic movie films “Rocky.” His body rests next to his wife at the Forest Lawn Memorial Gardens Central in Ft. Lauderdale. 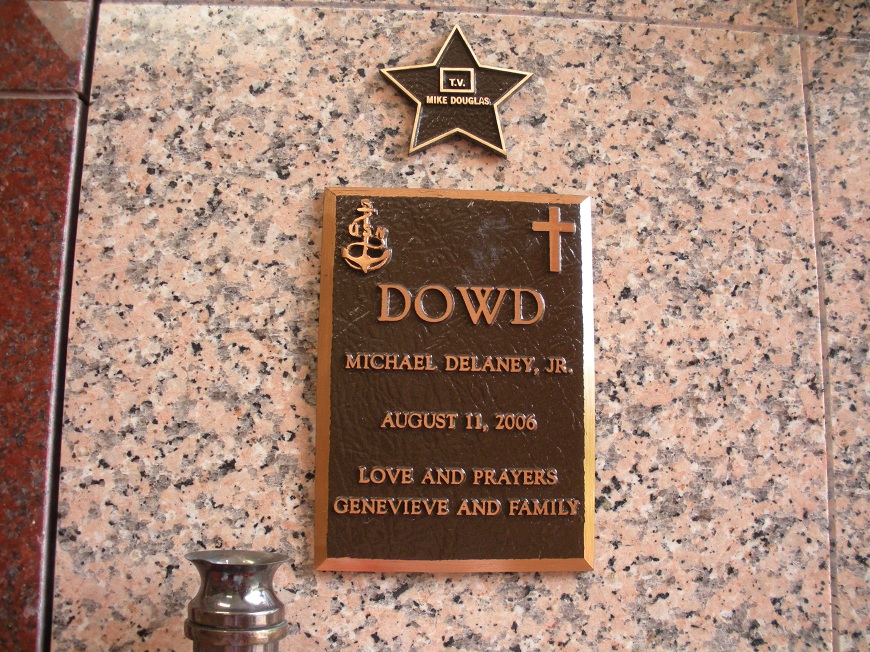 For 20 years, Mike Douglas was the host of “The Mike Douglas Show,” and captured the hearts of everyone in the country. Some of Douglas’s famous guests included John Lennon, Truman Capote, and Bob Hope. After retiring in the early 1980s, Douglas found a home in Palm Beach Gardens. He now rests in Riverside Memorial Park in Tequesta. 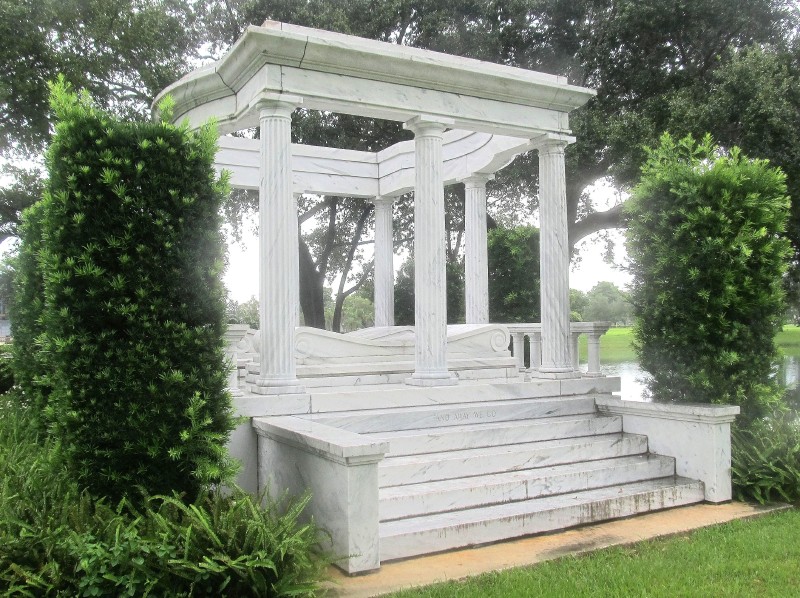 Known for his roles in television series as Ralph Kramden in “The Honeymooners,” Jackie Gleason was a renowned actor and comedian. After a successful entertainment career that transitioned from television series to movies, Gleason decided to move to Florida in the late 1960s, with the sole purpose of being able to play golf every day. He passed at his home in Fort Lauderdale. Resting at Our Lady of Mercy Catholic Cemetery in Miami, his family mausoleum greets you at the stairs footsteps with the words “, and away we go.” 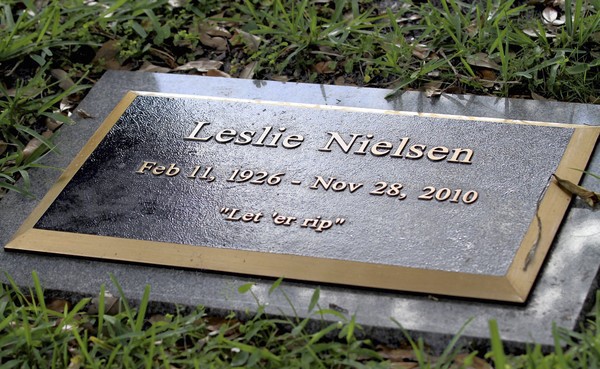 Known for his many leading man roles in science fiction classics like “Forbidden Planet,” Nielsen moved between comedy, drama, and fiction with great success. He became an icon for his deadpan exchanges like “Surely you can’t be serious?” “I am serious. And don’t call me Shirley.” Engraved in this tomb is “Let ‘er rip,” and by its burial in Ft. Lauderdale, there is also a memorial bench engraved with “Sit down whenever you can,” remembering his comedian personality. 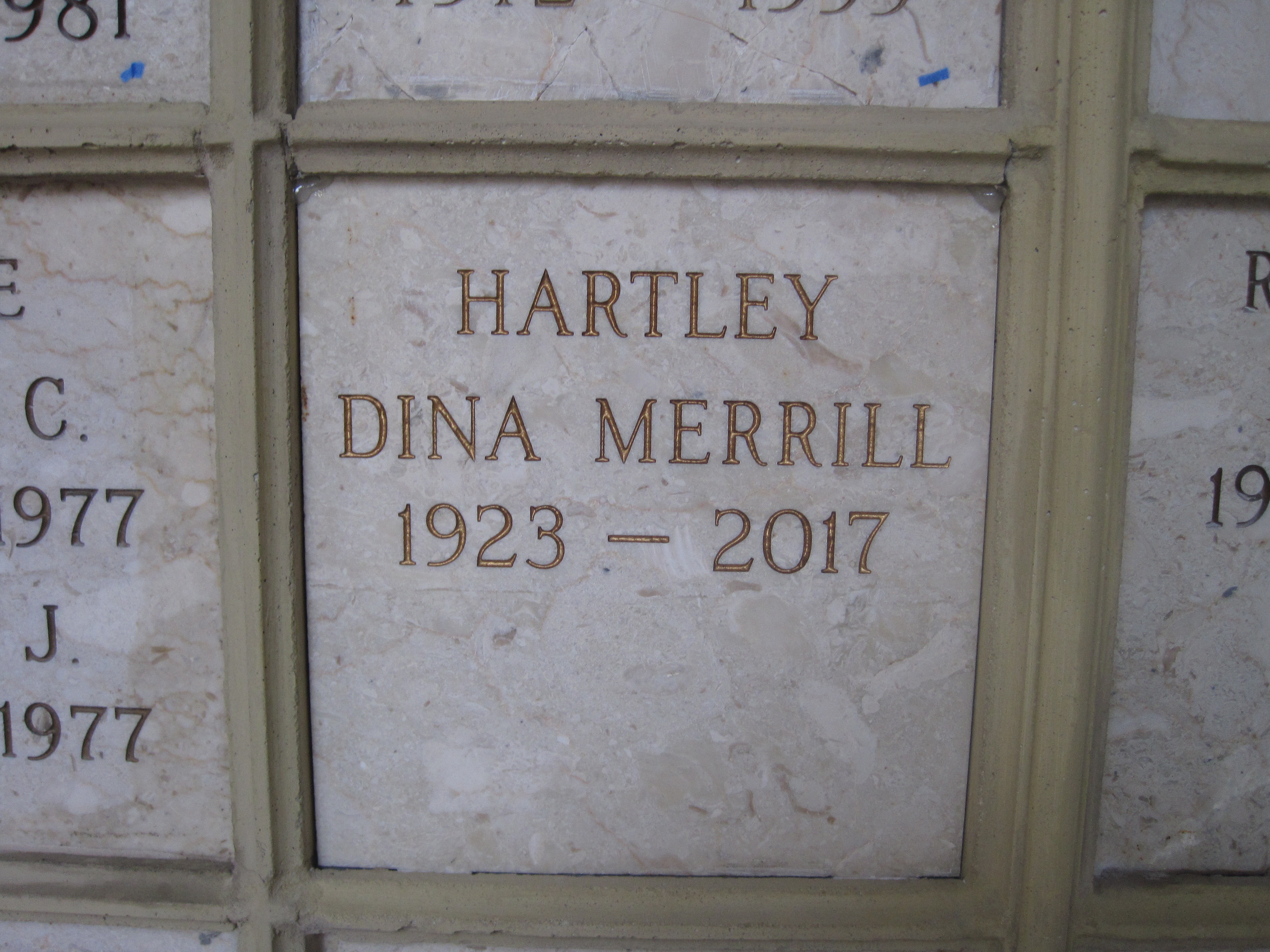 Her career spanned over six decades. Many times marketed as the next Grace Kelly, Dina Merrill showcased her talents on the small screen with credits such as “Batman,” “The Love Boat,” and “Mission: Impossible.” She then went on star in plenty of movie films including “Young Savages” and “The Player” in 1992. After a life dedicated to television, film, and theater stages she received a lifetime achievement award from the American Academy of Dramatic Arts in 2005. Dina’s resting place is back home in Palm Beach County. 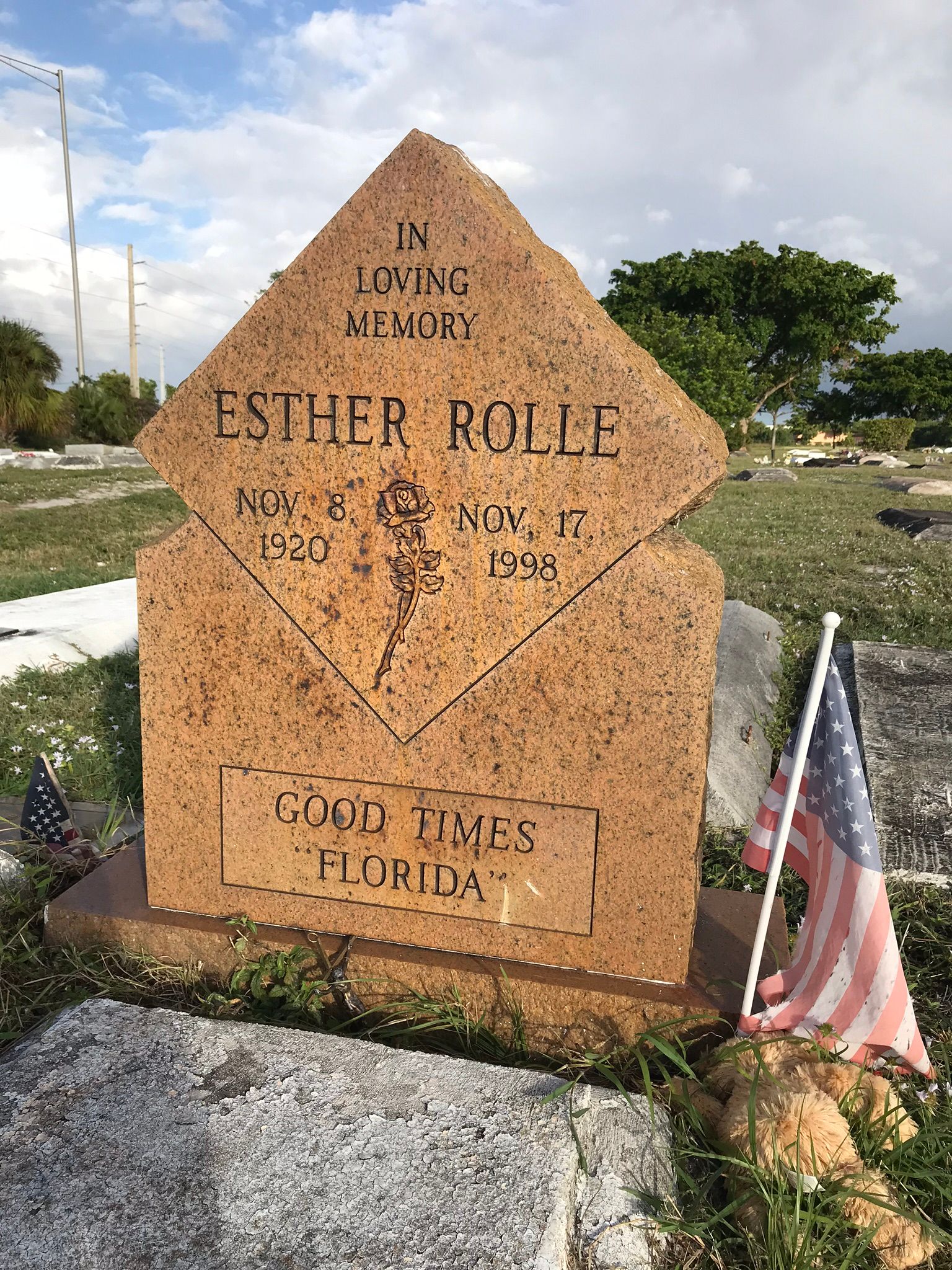 A Pompano Beach native, Esther Rolle is most known for her TV appearances in shows like “Good Times” and “The Summer of My German Soldier,” which earned her an Emmy award. She is remembered at Westview Community Cemetery in Pompano Beach, where her gravestone reads “Good Times Florida.” His baseball career spanned well into 19 seasons. Nicknamed “The Kid” he was one of best catchers for the Montreal Expos and New York Mets. His talent earned him a spot in the Baseball Hall of Fame in Cooperstown in 2003. Carter died of brain cancer in 2012 and is buried at Riverside Memorial Park in Tequesta. His gravestone reads “The Kid, safe at home with Jesus.” Known for his iconic blue suits, Chuck Daly coached the Olympic Dream Team in 1992, which included players Michael Jordan, Patrick Ewing, and Charles Barkley bringing home the gold medal. Inducted to the Hall of Fame in 1994, Daly was named one of the NBA’s 10 Greatest Coaches in 1996. Daly rests in Tequesta. Although Como had a successful barber career, he started singing with big bands by the 1930s. Later on, 14 of his singles landed No. 1 spots, and he sold over 100 million albums. Como’s career also spanned more than 20 decades in television, earning 5 Emmy Awards. His music still lives in famous movies like “Oceans Eleven,” “The Sopranos,” and “Bridget Jones: The Edge of Reason.” His grave in Tequesta, next to his wife’s, is often marked with coins left by admirers. Remembered as the voice of the famous Southern rock band, “Molly Hatchet” and later on his band, “The Danny Brown Band,” only to return to his first band. Danny Brown rests in Lauderdale Memorial Park in Ft. Lauderdale. His gravestone reads “Loving son, father, brother, and friend. Standing tall – arrow straight – unencumbered by the weight: singing a new song unto the Lord ‘, He Delights In Me.’” 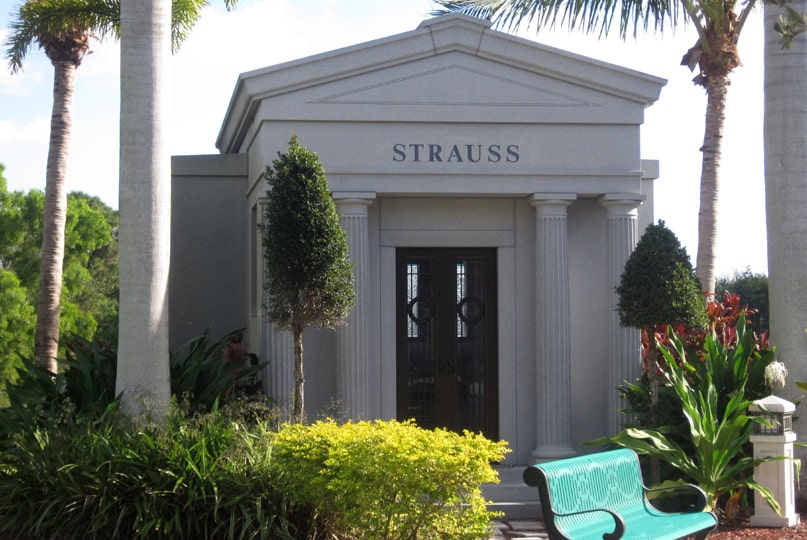 Her acting career started as a dancer in the program “Schlitz Playhouse of Stars” where she made her small screen debut. After being tutored in acting, she had plenty of guest roles in “Waterfront,” “Alfred Hitchcock Presents,” and “Broken Arrow.” Her big breakthrough was when she landed a recurring role as Elena Torres in the series “Zorro.” In the end, Eugenia retired in the late 1960s to raise her family with husband, Robert Strauss. She now rests at a private family mausoleum here, at The Gardens of Boca Raton Cemetery. Likely the first male ballet superstar, Fernando Bujones changed the scene of the South Florida ballet scene. He continued to perform, stage, and teach ballet until he died of melanoma at age 50. He is buried at Woodlawn Park North Cemetery and Mausoleum in Miami. His gravestone reads “Your beautiful life will continue to embrace and inspire us forever.” Even animal celebrities buried in Florida are remembered. The original “Flipper,” Mitzi played the role of the dolphin in the movie and television series for over four years. Her grave is marked by a life-size dolphin statue at the Dolphin Research Institute and Center in Marathon. Her gravestone reads “Dedicated to the memory of Mitzi. The Original Flipper.”

After becoming a sensation on SoundCloud, an audio distribution family, XXXTentacion quickly rose to become a very influential name within the rapping music scene. His second album promptly moved to the No. 1 spot on the Billboard 200, with its single Sad! Unfortunately, his career was cut short after the rapper was shot dead at age 20. His final resting is a private mausoleum at The Gardens of Boca Raton Memorial Park.

Indeed, South Florida is the final resting place for many local celebrities. As well as those who chose Florida to retire and rest before leaving us. If you’re a South Florida resident, or you are visiting, make sure to stop by one of these burial sites to celebrate the life of our best-known celebrities.

It’s always sad when we hear about a celebrity’s death, watching the news memorialize them makes us think back to how that person — whether they were a musician, actor/actress or something else that made them famous — affected our lives. We think about how their art might have inspired us or got us through bad times, or how we celebrated something great in our lives during their peak.

But now, after their lives on earth have ended, we can still learn from these high-profile lives. Famous celebrity funerals are often well-covered by the media, so we see both the good and the bad involving their funerals, as the world says goodbye.

What Can We Learn From Prince’s Funeral?

When the musician died in early spring of 2016 at the early age of 57 years old, we were all shocked and surprised. But his family and friends were also shocked to find that he failed to leave a will for his $250 million estate. With no living heirs to speak of, Prince’s assets were in jeopardy, and his family and lawyers had to try to figure out who would inherit his millions.

Planning ahead and making a will to distribute your money and property to the specific people you’d like to have it is a loving way to keep your family from guessing what your wishes were. Your family will want to spend their time together sharing memories about you, not squabbling over your assets.

What Can We Learn From Joan Rivers’ Funeral?

Before Joan Rivers’ death, she was placed on life support by her daughter Melissa Rivers and her family, and it’s believed that Joan had this prearranged in advance directives in her living will.

If you are incapacitated or you are unable to communicate your wishes to your family during a sickness or emergency, you should have a living will to help share your wishes on how you would like to be treated.

Also, she let her wishes be known in her book on how she would like her funeral to be carried out, which is another thing we should consider doing in our will (this is separate from a Living Will).

What Can We Learn From Hunter S. Thompson’s Funeral?

Famous writer Hunter S. Thompson had a funeral for the ages in 2005, as actor Johnny Depp, who portrayed him in a couple films, funded the author’s funeral service.

Within our will, we can make known our desires for how people should remember us after we’re gone. Choose some music you’d like played, who you’d like to speak, and where you’d like the proceedings to take place, all before others have to make those decisions for you.

You and your family members might not be as famous as these three celebrities were, but your funerals will be just as important to your friends and relatives. Make sure you learn from these famous celebrity funerals, as final resting places are chosen and arrangements for funerals are decided upon. Let funeral homes like The Gardens of Boca Raton Cemetery and Chapel help you with your decisions. Should I Have Life Insurance?

Life Insurance? No one ever wants to think about when they might die, so the question of, “Should I have life insurance?” often brings up that very point. But anyone who is married or has children should certainly get life insurance to help protect their loved ones financially. A life insurance policy is meant to… View Article The Benefits of Pre-Planning Funeral Expenses Think back to the funerals you have gone to in the past, whether they were for family members, friends or co-workers. Remember how the grief affected the family of the deceased, and how many different steps were involved with the funeral, from the viewing to the funeral service to… View Article

Will Life Insurance Help Pay for a Funeral?

Does Life Insurance Pay? One of the most common questions asked by grieving family members after the death of a loved one is “Will life insurance help pay for a funeral?” The short answer is “yes,” but there are definitely some things you have to know. First, a life insurance policy should certainly be able… View Article

Tags: Above Ground Burial, Mausoleum
We Are Here For You